A party celebration wouldn’t be complete without one of these fun Party Games for Kids. They’re loads of fun for the party guests and the birthday celebrant as well.

Throwing a holiday party? Check out our list of Easter Party Games for Kids as well!

Face cookie is a famous minute to win it game that can be played by the kids by placing a cookie on the forehead with the object of moving the cookie from the forehead down to the mouth without using your hands. Just scrunching your face to bring it down without letting it fall to the ground. It’s a great party game for kids especially teenagers but young kids should have no problem doing it too. 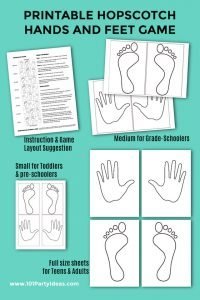 Hopscotch Hand and Feet Game is a fun game for kids of all ages. The object of the game is to hop with your hand and feet but making sure you’re landing on the corresponding hand and feet pattern on the floor. Every row involves 3 patterns (2 hands and 1 foot or both feet and one hand. Landing your left foot on a right foot pattern on the floor gets you not only eliminated but gets everyone giggling as well. Print the Printable Hopscotch Hands and Feet Pattern to start playing.

A candy relay race is a great group party game for kids. Simply group the kids into 2. Have the first kid run to a bowl to randomly pick a number (1 to 5 written in a paper). He or she reads the number and runs to another spot to eat the number of candy that he/she picked and goes back to the starting point so the next child can do the same. The first group to finish the candy relay race wins! You can use Skittles or M&M’s for this game so it’s a great game if you’re throwing a Rainbow Unicorn Party.

Cakewalk is a game of luck where kids can win a prize (or a cake)! To play the game, set up number cards on the floor in a circle. Number it 1 to 10 or 1 to 20 depending on how big your party is and how many you think will participate. Have the kids walk around the circle when the music plays and stopping at the number when the music stops. On a table are the prizes numbered 1 to 10 and in a bowl are corresponding numbers. Randomly pick a number in the bowl (use numbered paper or number ping pong bowl) and the person standing on that same number wins the prize for that number called. 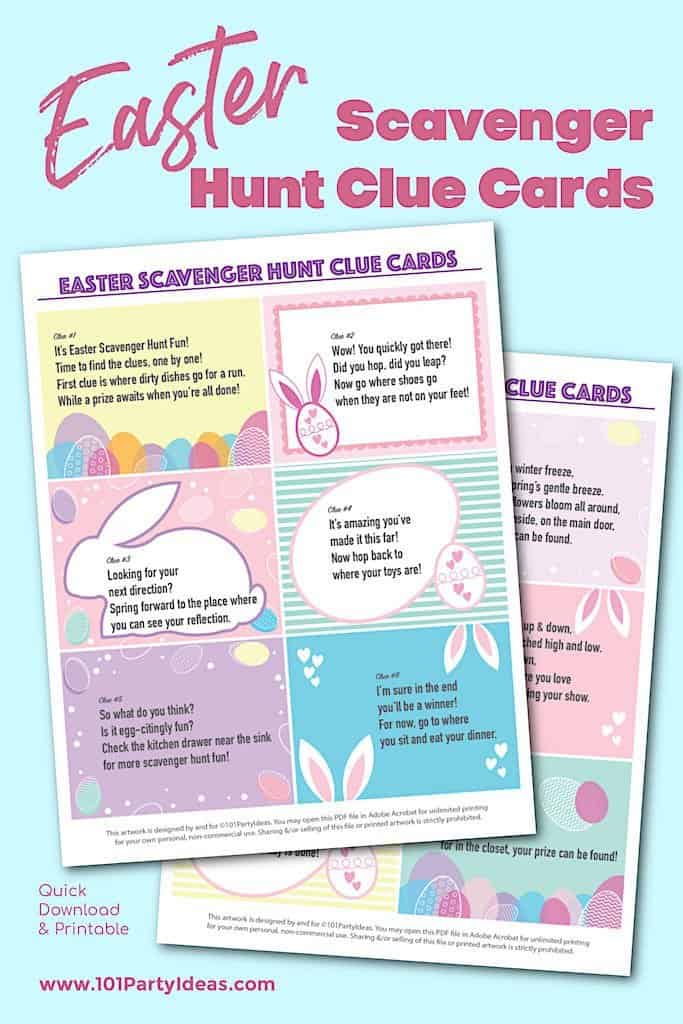 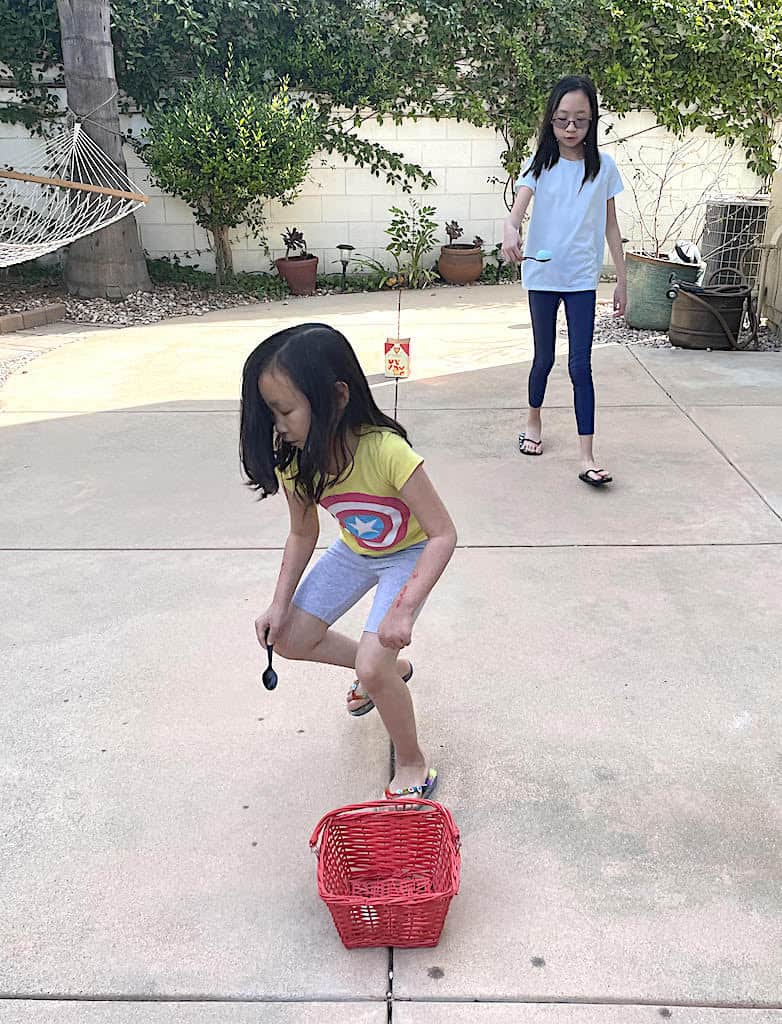 To play the egg and spoon race game, hand out either plastic eggs, a hard-boiled egg, or even golf balls and a spoon to each kid and have them all gather at the starting line. Once you shout start or blow the whistle, all the kids race with a spoon in their hand while balancing the egg on the spoon. If the egg falls, the participant needs to go back to the starting line. The first one at the finish line wins! This is a fun outdoor game for kids of all ages.

DONUT ON A STRING

Donut on a string is an eating race game for kids who most likely can’t eat a whole apple as the adults do in the classic apple on a string game. In this game, simply tie a donut to a string and attach it to something sturdy – the patio’s pergola or tree branch. The player who finishes the whole donut first without letting any piece of it fall to the ground, wins. Make sure every player has their hands on their back. If it’s too much work, you can also just put the donut on a paper plate and have the kids play the game on a table. The donut on a string game is especially fun when you’re throwing a Donut Party.

Similar to the classic musical chair game, the musical statue is a fun party game for kids that don’t need anything but music. Let the kids dance with the music and freeze when the music pauses. Anyone caught moving after the music is paused is out.

THE FLOOR IS LAVA

Jump to a higher spot, the floor is lava! Play The Floor is Lava game with the kids outdoor for a less messy living room situation. Set up spots in the backyard the kids can jump unto, making sure every kid is out of the grass aka “lava when you shout the floor is lava.

How low can you go? Let the kids play the limbo using a PVC pipe, pool noodle, or any long stick that you can decorate to match your party theme. Play some music and let the kids shimmy their way under the limbo stick. The one who can get through the limbo stick at its lowest level wins! This is a great addition to any Beach party, Moana party, Hawaiian Luau party, or pool party.

A classic party game for toddlers is the musical chair game. Play it by setting up chairs in a circle facing outward. Using one less chair than the number of players, gather the kids around the chair and have them walk and dance around while the music plays. When you stop the music, they must find a chair to sit on. Take one chair out after every stop until only 1 chair is left for two kids to play. Final kid to sit on the chair wins.

Scavenger Hunt is a great party game for kids that actually involves everyone – both the kids who will race to find an item that was called for and the adults or parents who usually hand out the item to the kids. It can be played indoors or outdoors. Prepare a scavenger hunt list of 10 to 20 items the kids need to look for. The list can include things like lipstick, eyeglass, employee I.D., etc. or if done outdoors, call out for rocks, flowers, etc. Prepare the same amount of small prizes so the first one to come back with the item called for can win a prize.

A fun party game for toddlers that will have everyone giggling is the bubble wrap race. To play this game, roll out a 5-foot piece of bubble wrap on the floor and have the kids cross barefoot without popping a bubble. You can group the kids as well and the team that crosses the fastest with the least pop wins! After the game, of course, you can also let the kids have fun by putting on some music and letting the kids jump to pop every bubble!

THE BOAT IS SINKING

Another group party game that gets everyone moving around is The Boat is Sinking Game except this time you can’t choose your group until the captain has called the number. The host will serve as the captain to call out “The boat is sinking, group yourselves into….”. If 5 is called, participants have to group into 5. Anyone not in a group of 5 is automatically out of the game. A number keeps getting called until only a small group is left and everyone in that group is the winner. This can be a fun addition to a Nautical Party or a Sailor Party.

A fun outdoor game for kids is the potato sack race. Start the game by lining up the kids in their sacks on one end. You can use pillowcases or drawstring laundry bags but it’s better to just buy either burlap bags or the white sacks with party hopper printed on them. Just make sure to play them on a lawn. This is also a great Easter game for kids.

To play red rover, have the kids line up and have them link arms in two separate lines. Each line or team will alternate saying the riddle, “Red rover, red rover, let ____ come over!” where they will choose which kid from the opposing team to run over and break their chain. If the kid called can’t break their linked arms, he or she needs to join their team.

Having a house party and the kids are getting bored? Simply tell them to go play hide and seek, it’s simple and fun! It’s also a great party game for kids when you’re tight on a budget and time. It’s a party game that can be played indoors and outdoors.

What’s a party without piñata? Every young guest anticipates it even though it’s usually the signal that it’s the end of the party. To play it, have the kids line up from smallest to biggest and let them crack open the piñata using a stick. If bigger kids are playing, you can even blindfold them. Just make sure to check that there are candies inside before hanging it up and that there are no kids near the batter once it’s time to hit the piñata. There is a piñata to match any party theme, whether it’s a boy party theme or girls party theme so it’s an easy party idea.

A fun group game for kids is the game of tug or war. To play the game, simply divide the kids into 2 teams and let them battle it out by pulling their side of the rope with all their might. Whichever team pulls the other to their side is the winning team! It’s best to do it on the lawn to avoid knee scratches in case the winning team is really strong.

A simple party game for kids that doesn’t need props is the game of charades. Kids simply need to bring their acting skills and hopefully, guests can guess properly. Simply list out words they have to act out and let the games begin. If you have young players who can’t read yet, get the charades for kids – no reading required, as the cards have drawings that they can use as visual instead.

Another fun outdoor party game for kids is the three-legged race. To play it, pair up the kids and simply tie a bandana or fabric around each partner’s leg. The pair will then have to work together to run towards the finish line first without falling down. This is especially fun when you’re throwing a Superhero Party with kids on masks and capes.

Get the kids excited over this fast-paced kids party game called hot potato. Similar to musical chairs, this musical passing kids party game will have the kids tossing the “potato” around in a circle while the music is playing. When the music stops, the one holding the potato is out. The last player standing wins! You can use a potato, a balloon, or even a toy dinosaur if you’re throwing a Dinosaur Party.

PIN THE TAIL ON THE DONKEY

Pin the tail on the donkey is a classic party game for kids. Simply blindfold the little one and see who can pin the closest to the tail of the unicorn if you’re throwing a Unicorn Party or tail of the llama for that cute Llama Party.

101PartyIdeas is a participant in the Amazon Services LLC Associates Program, an affiliate advertising program designed to provide a means for sites to earn advertising fees by advertising and linking to Amazon.com.